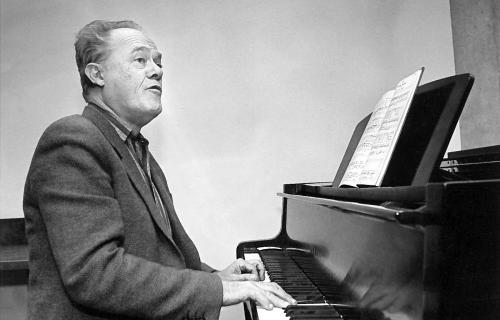 The Research Center for the Sociology and Aesthetics of Music in collaboration with “A. Corelli” Conservatory of Messina and Eng. António de Almeida Foundation are pleased to announce the International Bilateral Colloquium “The Blue Knight: Charles Rosen 1927-2012”, to be held in Porto (Portugal) from 20 to 22 October 2022.

The title of the colloquium refers to the title of a magazine of exceptional historical importance, Der blaue Reiter. Published during the first decade of the 20th Century, the magazine became an important vehicle for spreading new and radical ideas about art, a place for sharing experiences between Schönberg e Kandinskij, which was rich in aesthetic implications.

However, Der blaue Reiter is, firstly, the title of a figurative painting by the same Kandinskij, depicting a knight dressed in a blue cape riding within a sloping golden-green meadow. The Russian painter, invited to explain the meaning of the painting, claimed to have been fascinated by the myth of the medieval knight, and to have represented this knight as a symbol of the struggle of the spirit against materialism. So, we take up this idea to remember Charles Rosen, knight of music.

With 2022 marking ten years since the death of the American pianist and musicologist, this colloquium is a good opportunity to pay homage to this exceptional figure, recall his musicological and artistic legacy, and to judge and to collectively appreciate the timeliness of his thought: firstly, with regard to his research on Viennese Classicism, on the numerous aspects of the Romantic and Modern period; secondly, the opportunity to once again take up his critical suggestions which, although not developed, are nevertheless interesting epistemological openings for a researcher of the present day.

Rosen was one of the most influential musical personalities of the last half century, due to the unique combination of the depth of his musical knowledge, his enormous culture, the sharpness of his critical eye, his ability to link observations on the technical data of music to the aesthetic and ideological background underlying the origin of compositions, but also for the attention he gave to the practical problems of performance and the theoretical implications of the interpretative act in music.

With his essays and monographs, Rosen traversed the repertoire of classical music from Bach to Carter, basing himself on the idea that the masterpieces of the most different periods and styles all lie on the same ideal plane, thereby constituting the plural but unitary thesaurus of Western music. No one more than Rosen highlighted the repertoire of the 20th century, from the classical to the avant-garde, justifying it from the point of view of the phenomenology of music, the powerful dialectic of languages, styles, authors, and particular works, which form the delta of Neue Musik. No one more than Rosen testified to the need to orient musicological reflection within an interdisciplinary perspective, opening research up to the relationships, which today should be reaffirmed, of the musical panorama with that of literature, painting, customs, the history of ideas, and even ideology and politics. This stance resulted in the set of Rosen’s critical masterpieces: The Classical Style, The Romantic Generation, Sonata Forms, Beethoven’s Piano Sonatas, his essay on Schönberg, as well as his numerous essays on musical aesthetics and music history.

This conference welcomes approaches that might clarify and explore the various facets of Rosen’s musical personality in order promote new perspectives and dialogue about his status and impact as musicologist, performer, critique and pedagogue.

Sara Zurletti (CONSERVATORY “A. CORELLI”, IT)