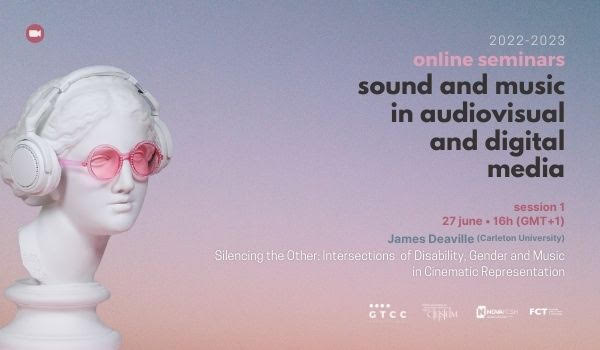 Session no. 1
Silencing the Other: Intersections of Disability, Gender and Music in Cinematic Representation • James Deaville (Carleton University)

«This paper uncovers the problematic intersection of music, disability, and gender in recent Hollywood films that feature non-speaking women as protagonists: Ada in The Piano (1994) and Elise in The Shape of Water (2017). The popular press has lauded both films, and The Piano has served as the topic for thought-provoking panels and journal issues. However, these movies should not be interpreted as signs of progress in Hollywood’s practices of representation (AII 2018), but rather as products of a tradition of oppressively silencing women and people with disabilities, on- and off-screen (e.g. Heath 2019). And as Blake Howe has recently argued, such narratives participate in the pernicious “cure or kill” solution of eugenics for disability (Howe 2019), intimately linked with the abjection of female subjectivity.
But a largely unexplored avenue does exist for resisting oppressive narratives in film: the soundtrack, which as “the ultimate hidden persuader” (Cook 2000, 122) provides an invisible medium for circumventing the interlocking structures of subjugation imposed by the visual narrative. Thus music possesses the potential to envoice forcibly muted female characters, resisting misogynist and ableist cinematic narratives in screen media (Cheng 2017). At the same time, music’s polysemy can likewise reaffirm and heighten the intersecting oppressions. My paper, a study of the intersections between music, disability, and gender on screen, seeks to interrogate the dilemmatic dynamics of cinematic silencing by exploring music’s agential role in representing non-speaking women in film.
In the cases of The Piano and The Shape of Water, closely reading the scores in their final moments reveals the soundtracks’ complicity with the eugenicist implications of the films’ narratives. The faux Scottish folk music of Michael Nyman sonicizes Ada’s eventual social rehabilitation through the acquisition of speech and re-acquisition of pianism, hence performing a cure narrative. At the same time, Alexandre Desplat’s music romanticizes Elise’s removal from human society at the end of The Shape of Water, rendering her elimination not only acceptable but desirable. However, The Piano director Campion resisted the “cure” dictated by Hollywood by offering an alternative resolution at the very end: picturing her body floating submerged above her piano, Ada delivers a poem about the silence of the sea, its stillness ironically symbolizing her agency.»***
The cycle of seminars on «Sound and Music in Audiovisual and Digital Media» is a set of online sessions that intends to bring together researchers from different areas and contexts in the international panorama currently working on the field of musicology and audiovisual, media, internet and digital platforms, with particular focus on recent themes, new perspectives and methodologies, and research challenges that these objects imply.
These seminars intend, on the one hand, to create open spaces for the sharing of knowledge around the most recent works in these areas at a global level, and, on the other hand, to promote the dissemination of research currently underway at CESEM and NOVA FCSH within the scope of these themes. The aim is to enhance a network of multidisciplinary collaborations underlined by musicology and audiovisual media.Driven by the mutations and adaptations that emerged as a response to the COVID-19 pandemic in the last two years, this cycle will take place in an exclusively online format to have a wider reach and accessibility in line with the characteristics of this initiative.
With sessions planned between June 2022 and May 2023, the seminars will be held periodically on the ZOOM platform and will be open to any interested party.