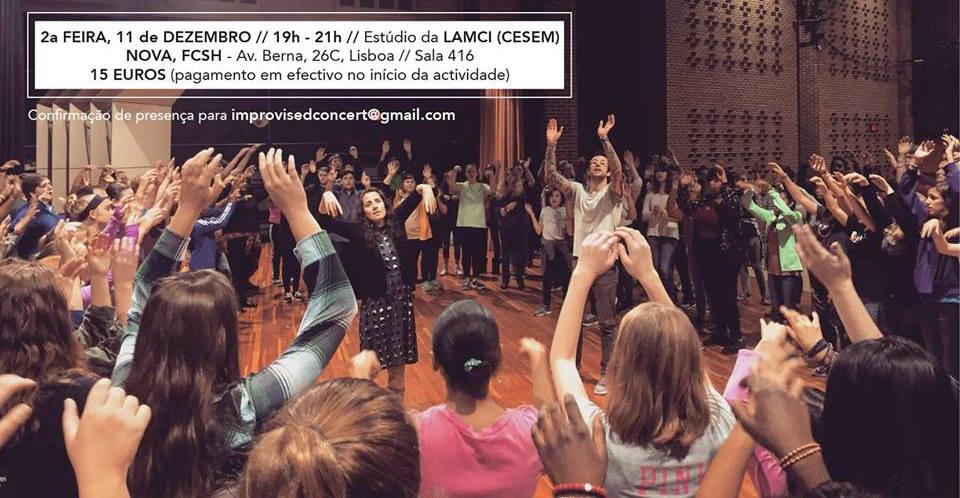 Circle singing session (improvised singing / circular group music) led by Rizumik (Tiago Grade) and Sofia Ribeiro, taking place at LAMCI’s studio on Monday, December 11, from 7 pm to 9 pm. The singers have already been here this summer, with their project The Whole Time, and held a circle singing session with a lot of receptivity, adhesion and success. This is an activity open to everyone who has any kind of relationship with singing and / or improvisation. They don’t have to be professional singers or musicians, they just have a taste for music and group activities. Here, the voice and the body are explored in an energetic and conscious environment, through creativity and improvisation. Spontaneity and fun are sharpened based on constant musical and dynamic creations that evolve throughout the session.

With little more than a decade of career, the Portuguese singer and songwriter Sofia Ribeiro has already established herself as one of the Portuguese voices with the greatest international projection. Known for her deep voice, enormous versatility and capacity for expression, Sofia immediately captivates each listener to her unique musical universe. He toured half a world, having performed in some of the most prestigious stages in Europe, the United States and South America, and there are several international awards that he has been accumulating, as the first place in ‘Crest Vocal Jazz’ (France) and in ‘ Voicingers’ (Poland), and second place in ‘Young Jazz Singers’ (Belgium). He has nine records as a leader, gives voice and improvisation workshops at universities and schools across Europe, the United States and South America, and is a resident artist at the prestigious Carnegie Hall. www.sofiaribeiro.com

Rizumik is an award-winning artist known for his rhythmic and improvisational skills. Born in Lisbon and resident in New York, he mainly connects with performance and teaching through music (singing, beatbox and percussion), dance and movement, and acting. Rizumik is part of the group of teachers who work with Bobby McFerrin (winner of 10 Grammy Awards) in the circle singing course – vocal improvisation at the Omega Institute in NY. He was the main actor in the renowned show The Voca People, having been in Off-Broadway for more than a year, as well as in the international cast, for several countries in the four continents. Rizumik was awarded as “Best Vocal Percussionist” in the 2017 edition of the renowned A Cappella competition ‘Harmony Sweepstakes’ and was the American beatbox champion of 2012. In Portugal, he won the Young Creators music award in 2008 with his vocal project wake up. Rizumik expresses his essence mainly with improvisation, humor and movement, and firmly believes in a more sacred and spiritual approach to musical practice and healing through sound. www.rizumik.com