In 2003, a rare and monumental work – unique among the music holdings of the National Library of Portugal – for 4 choirs (16 voices) and basso continuo (3 organs), was found in the collection of the Count of Redondo (P-Ln, F.C.R. 549).

The manuscript, the only known source of the work, lacks the first gathering (the first 8 pages), where the author’s name, title and year of composition were originally registered, in addition to the institution for which it was intended. The result was an anonymous limbo where it remained for more than one hundred years. The characteristics of the manuscript made it possible to establish that it was an autograph (the testimony of its creation) of Psalm 112, Laudate pueri Dominum, composed for an occasion of unusual social, political and/or religious relevance. The catalogues’ scrutiny in search of a possible author proved fruitless. Three years later, a comparative handwriting analysis finally rendered his identification possible: the Neapolitan Niccolò Jommelli (1714-1774), who, shortly before his death, was considered to be one of the greatest living composers, and was later consistently included in the Pleiad of memorable 18th century authors. Subsequent investigations established that the work was premiered with pomp and magnificence during the ceremony of Second Vespers of the Feast of Saints Peter and Paul (1750), at the Basilica of Saint Peter, in Rome. It is a unique and extraordinary work – and until its identification, completely unknown – in the context of Jommelli’s sacred polychoral production: Wolfgang Hochstein’s extensive and detailed thematic catalogue, Die Kirchenmusik von Niccolò Jommelli (1714-1774), does not include any work for more than two choirs (8 voices). In addition to being Jommelli’s first work composed for the Vatican Basilica, it employs two choirs placed on the balcony under the large dome at about 53 meters from the choirs placed next to the altar. The polychoral solutions contained therein demonstrate a high degree of experimentation by the – recently hired – assistant maestro at the Basilica of Saint Peter. The circumstances and possible reasons for the disappearance of the work from the sacred repertoire, as well as the journey undertaken by the manuscript until arriving at its present destination, are dissected in the new book published by Libreria Musicale Italiana (Saggi Ruspoli), which has its genesis in the special mention that the included essay won in the 6th International Musicological Studies Competition Principe Francesco Maria Ruspoli (Vignanello, 2014). At the request of the editor Giorgio Monari, and in order to restore this precious heritage, enabling the in-depth study by specialists and making it known to the music-loving public, the second part of Niccolò Jommelli’s Laudate pueri Dominum from Biblioteca Nacional de Portugal includes the work’s reconstruction and critical edition.

See also the blog of the National Library of Portugal. 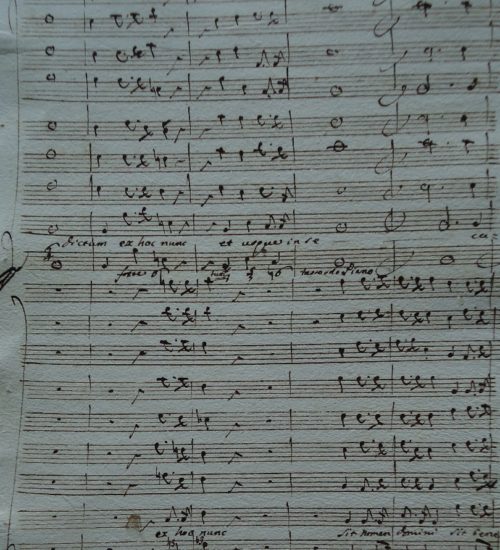