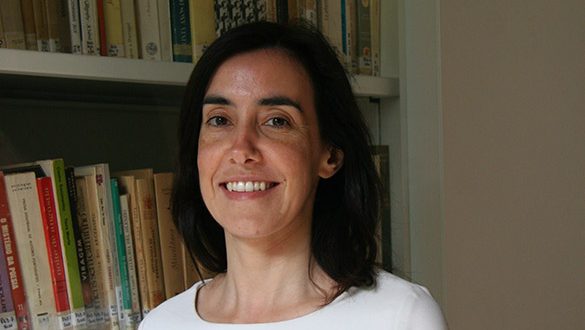 Researcher Ana Paixão, a member of CESEM since 2002 (in which she belongs to the Critical Theory and Communication Research Group and is part of CESEM’s Scientific Board) was awarded the Order of Merit in December 2018, at a ceremony held at the Portuguese Embassy in Paris. Ana Paixão, PhD in Comparative Literature, with a thesis entitled Rhetoric and techniques of literary and musical writing in Portugal between the XVII and XIX centuries, has been developing a continuous research activity in music and literature, marked by several publications and lectures. This distinction marks the extraordinary work of disseminating the culture (music, plastic arts, literature, dance, theater) and Portuguese language that the CESEM Researcher has been developing in Paris, where she takes over the direction of Casa de Portugal – André de Gouveia and is a cultural programmer for the delegation in France of the Calouste Gulbenkian Foundation. Ana Paixão has been promoting hundreds of cultural activities, organized between Cité Universitaire and FCG, sometimes in partnership with several Portuguese, French and international universities and institutions. She is a lecturer at the University of Paris 8 and coordinator of the Portuguese language courses at Camões – Cultural Center in Paris. It was the driving force for the reception of refugee residents in Cité. Since 2016, she has been running the “Women in the World” project, which has promoted 72 events since its inception. In 2017 was unanimously elected representative of the directors in the Board of Directors of the Cité internationale. He is a founding member of the Portuguese Societies of Rhetoric and Research in Music and belongs to the Scientific Editorial Councils of Vieira and Glosas magazines. She was a lecturer at the Paris III University – Sorbonne Nouvelle, and a French teacher applied to singing at the Conservatoire Nacional de Lisboa.